Larry Walker Jr., a native of Perry, Ga., and a former Georgia general assemblyman, will receive the American Bar Association Solo, Small Firm and General Practice Division’s 2014 Lifetime Achievement Award. The award recognizes solo and small-firm attorneys who are widely accepted by their peers as having significant lifetime distinction, exceptional achievement and distinction in an exemplary way.

Walker’s extensive career began in June 1965, when he graduated from the University of Georgia School of Law and took his first job. He soon purchased his first office space, just over 520 square feet, and hung his shingle: “Larry C. Walker Jr., Attorney at Law.”

A judge in the Perry Municipal Court by age 23, Walker never slowed down. He was elected to the Georgia General Assembly in 1972, taking the seat formerly occupied by Sam Nunn. He served continuously until January 2005. Furthermore, Walker assumed the duties of administration floor leader for Gov. Joe Frank Harris in 1983, and in 1986, he was elected majority leader of the Georgia House of Representatives, serving in that capacity for 16 years. 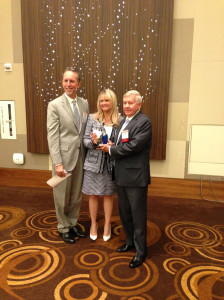 Among Walker’s achievements, he was a founding member of Walker, Hulbert, Gray & Moore LLP, served as chair of the state Legislative Leaders Foundation (1999-2002), represented Georgia’s 8th Congressional District on the Georgia Department of Transportation Board (2007-09), and in August 2009 was appointed by Gov. Sonny Perdue to the University System of Georgia Board of Regents as an at-large member.

Walker writes a weekly column for the Houston (Ga.) Home Journal and is the author of “Life on the Gnat Line.”

With over 17,000 members, the ABA Solo, Small Firm and General Practice Division (GPSolo) is committed to providing unique resources exclusively for solo, small-firm and general practitioners, who represent half of the nation’s lawyers. For more information on ABA GPSolo, go to www.ambar.org/gpsolo.